You have no items to compare.

Welcome To Our Store

You have no items in your shopping cart.

Product was successfully added to your shopping cart.
Swipe to the left

The History of Christian Dior 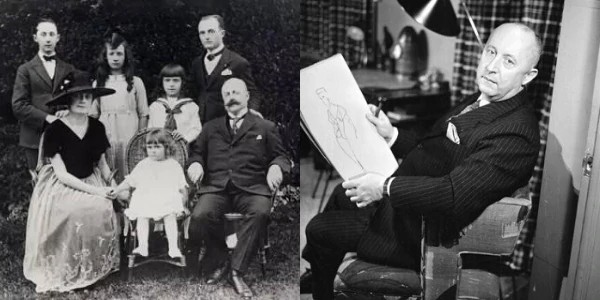 By Spottedbags 10 months ago 149 Views No comments

Dior, a brand rooted in history and just as luxurious as it sounds. An internationally renowned brand since 1946, the French fashion house acclaimed for its elegance and timeless femininity. A leading company that has remained at the top of fashion's hierarchy for over 70 years, Dior's unique look has influenced the world of fashion since the beginning. Innovative but traditional, Dior maintains its reputation as creator of recognized haute couture. From their ready-to-wear fashion, leather goods, accessories, or footwear, Dior changed the game forever. To this day, the brand is all around us in some way, shape, or form - even if we don't know it.

Founded by Christian Dior, born January 1905, the fashion house was established in December 1946 at 30 Avenue Montaigne in Paris. Dior's first collection launched on February 12th for Spring / Summer 1947 at the company's head quarters. An instant success, Harper's Bazaar Editor-In-Chief Carmel Snow strongly believed in Dior's talent. "It's quite a revolution, dear Christian! Your dresses have such a new look," she exclaimed. Thus, the "New Look" became a trademark. Introducing unique silhouettes consisting of shorter, fuller skirts, tighter waists, and accentuated busts - Dior's pieces were revolutionary, especially in the 40s. "I wanted my dresses to be 'constructed', moulded on the curves of the female body whose contours they would stylish. I accentuated the waist, the volume of the hips, and I emphasized the bust. In order to give my designs more hold, I had nearly all the fabrics lined with percale of taffeta, renewing a tradition that had long been abandoned," said Christian Dior.

The brand continued to flourish. By the mid 1950s the house of Dior was a highly respected fashion empire. Dior dressed countless celebrities including Marlene Dietrich, Ava Gardner and members of the royal family.

Upon the tragic death of Christian Dior in 1957, 21 year old Yves Saint Laurent took the creative reigns of the acclaimed fashion house. Saint Laurent kept Christian Dior's legacy alive by using the same fabrics, keeping the proportions and silhouettes relatively similar. However, Saint Laurent's collections featured pieces that were softer, lighter and easier to wear. Saint Laurent's designs became more daring due to his success at the fashion house until 1960 when his bohemian collection was harshly criticized. Saint Laurent was called up to join the French army, thus forcing him to leave Maison Dior, which raised no objection with the Dior management.

Following the departure of Yves Saint Laurent, Marc Bohan was appointed creative head in the late 1960s. Instilling a more conservative style, he was credited as the man who kept the Dior label "at the forefront of fashion while still producing wearable, elegant clothes" and Women's Wear Daily claimed that Bohan "rescued the firm." In 1967, Bohan's assistant Philippe Guibourgé launched the brand's first French ready-to-wear collection called "Miss Dior."

In 1989, Italian-born Gianfranco Ferré replaced Bohan as head designer. As the first non-French designer to take the creative reigns at Dior, Ferré left behind the traditional Dior aesthetic. With a reputation for feminine, romantic silhouettes, Ferré introduced a new style concept described as "refined, sober and strict." As head of Haute Couture, Haute Fourrure, Women's Ready-To-Wear, Ready-To-Wear Furs and Women's Accessories collections, Ferré was awarded the Dé d'Or. Commonly known as the "Golden Dice" the Dé d'Or was awarded twice a year in France to haute couture designers from 1976 - 1990.

Also in 1995, Bernadette Chirac (wife of former French President Jacques Chirac) contacted Christian Dior, explaining that she wished to gift the Princess of Wales a unique handbag upon her visit to Paris. The Maison created a structured black bag, unofficially named the Chouchou. It was presented to Lady Diana at the Cézanne exhibition at the Grand Palais. Shortly after, the bag was seen on the arm of the Princess during her visit to a children's home in Birmingham. She was photographed that day with bag, holding a child in her arms. A few weeks later, she was photographed again with her favourite bag during a state visit to Argentina. Described as "iconic" and "legendary", Dior launched the bag in a larger series and changed the name to the "Lady Dior" in 1996 with Princess Diana's blessing. Two hundred thousand models were sold in two years, thus Dior's leather goods turnover massively increased. 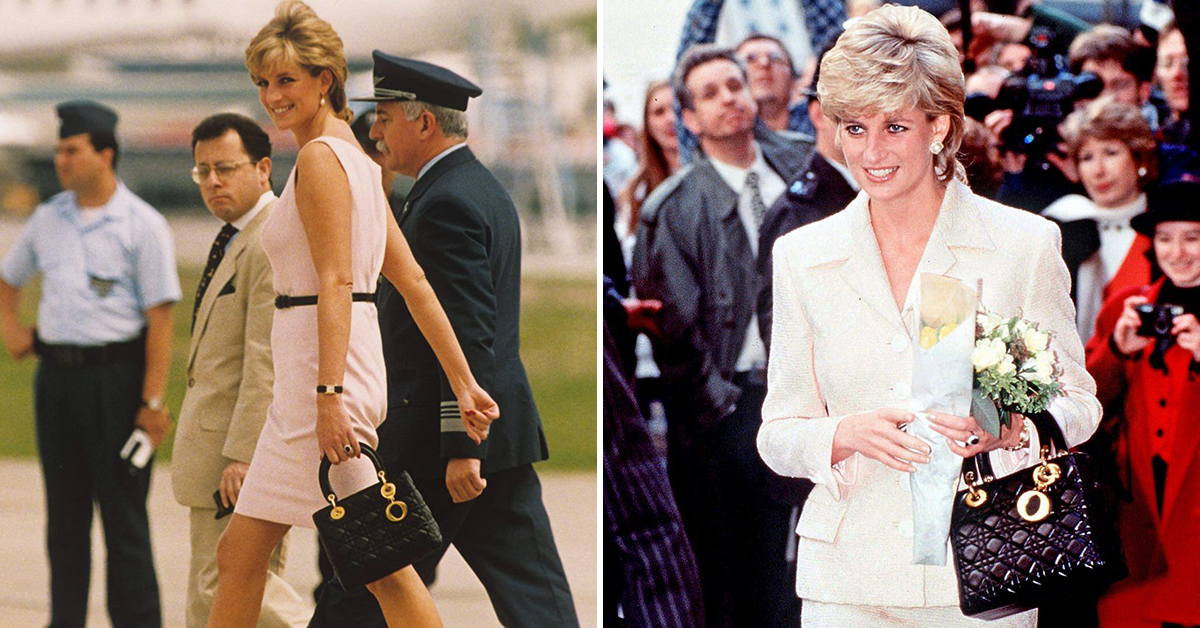 The Lady Dior bag features padded cannage leather, inspired by the Napoléon ||| chairs Christian Dior once used to welcome clients on the day of his first show in 1947. With its structured silhouette, and sturdy top handles, the Lady Dior also features the letters D, I, O, R on charm pedants as an eternal signature. Each Lady Dior is crafted by hand. Commencing with manual cutting out of the leathers, the pieces are then assembled and moulded around a wooden form, finally it is meticulously sewn together. In total, there are 140 distinct pieces that are necessary in the process of creating a Lady Dior, hence the luxurious quality.

Over the years, several celebrities have been the face of Lady Dior including Carla Bruni, Diana Kruger, Monica Bellucci and Marion Cotillard. To this day, the Lady Dior remains an iconic piece for the brand.

Under the influence of Anna Wintour, Editor-In-Chief of Vogue, Dior appointed John Galliano as creative director in 1997, replacing Gianfranco Ferré. The choice of British designer sparked some controversy as once again, a non-Frenchman held the creative reigns. However, Galliano was compared to Christian Dior himself by Dior's chairman Bernard Arnault, noting that "Galliano has a creative talent very close to that of Christian Dior. He has the same extraordinary mixture of romanticism, feminism and modernity that symbolized Monsieur Dior. In all of his creations - his suits, his dresses - one finds similarities to the Dior style."

In July 2000, Hedi Slimane succeeded Patrick Lavoix as lead designer for Dior Homme. Although the menswear line was originally founded in 1970 by Marc Bohan, it was no where near as successful as the womenswear line and the boutique was shut down. Slimane re-vamped Dior Homme, giving it a modern, masculine aesthetic. Soon, the label had gained prominent male clientele when Brad Pitt and Mick Jagger were seen wearing it. In 2002, Slimane was awarded the "International Designer of the Year" award by the CFDA. Kris Van Assche was appointed the new creative director of Dior Homme in 2007 after the departure of Hedi Slimane.

By 2011, chaos struck the house of Dior when several accusations were made against John Galliano for making anti-Semitic remarks. The label found itself in a "public relations nightmare." Galliano was, naturally, fired in March just before the debut of his Fall / Winter 2011 collection, which commenced without him.

Bill Gaytten was appointed as the head designer upon the scandalous departure of John Galliano, despite the remaining absence of the artistic director position. Gaytten had previously worked under Galliano for both Dior and the John Galliano label. His first collection for Dior received mostly negative reviews, however in January, Gaytten presented his second haute-couture collection which was much better received.

Finally, it was announced on April 11, 2012 that Raf Simons was appointed as the new artistic director of Dior. Acclaimed for his minimalist designs, sharp silhouettes and effortlessly chic aesthetic, Simons was an interesting choice as his work greatly contrasted Galliano's eccentric and flamboyant style. In the hopes of moving forward from the embarrassment Galliano brought to the Dior name, the company was more than eager to go in a new direction. Slimane familiarized himself with haute-couture, as the designer had no previous experience in this field, and spent much time in the Dior archives. Hedi Slimane presented his first collection for Dior on July 2nd, the Fall / Winter 2012 haute-couture line - it thrived. Named "the new couture" by the company, Slimane was the breath of fresh air Dior so desperately needed. His work "made more referenced to Mr. Dior than to the house of Dior" with pieces inspired by Dior's post World War || designs.

In 2016, it was announced that Maria Grazia Chiuri would succeed Hedi Slimande as artistic director. A huge leap for the French fashion house, as Grazia Chiuri is the first woman to ever hold the position of AD. "Of course heritage is important, but I want to move this house further..." Explained Grazia Chirui when discussing her new position. "Dior stands for femininity but the idea of that is still steeped in the Fifties, femininity isn't something that finished in the Fifties; it can be more contemporary," she continued. And so it could. Grazia Chiuri transformed Maison Dior by reinventing it to suit the modern day woman. Although she stayed true to Dior's roots, she redefined what it means to be feminine. By adding a masculine touch, she illustrated that elegance could now go hand in hand with edginess. Her first collection was for Spring / Summer 2017 - a line featuring contrasting fabrics that included tulle, lace and velvet, while pieces were embellished with flower motifs and ruffles. The fairy-esque collection was enchanting and beloved by fashion lovers and critics across the globe.

Chiuri's Dior has since produced many notable pieces including the J'Adior handbag line, basic tees with "We Should All Be Feminists" prominently printed across it and a new Dior logo. Although time continues to progress and changes in the fashion industry are always occurring, Dior continues to produce beautiful, timeless pieces that remain innovative and original. Truly a brand with a fascinating backstory, Dior remains one of the most prominent and important fashion houses of our time.